The Case for NK Cell therapy over T-Cell Products 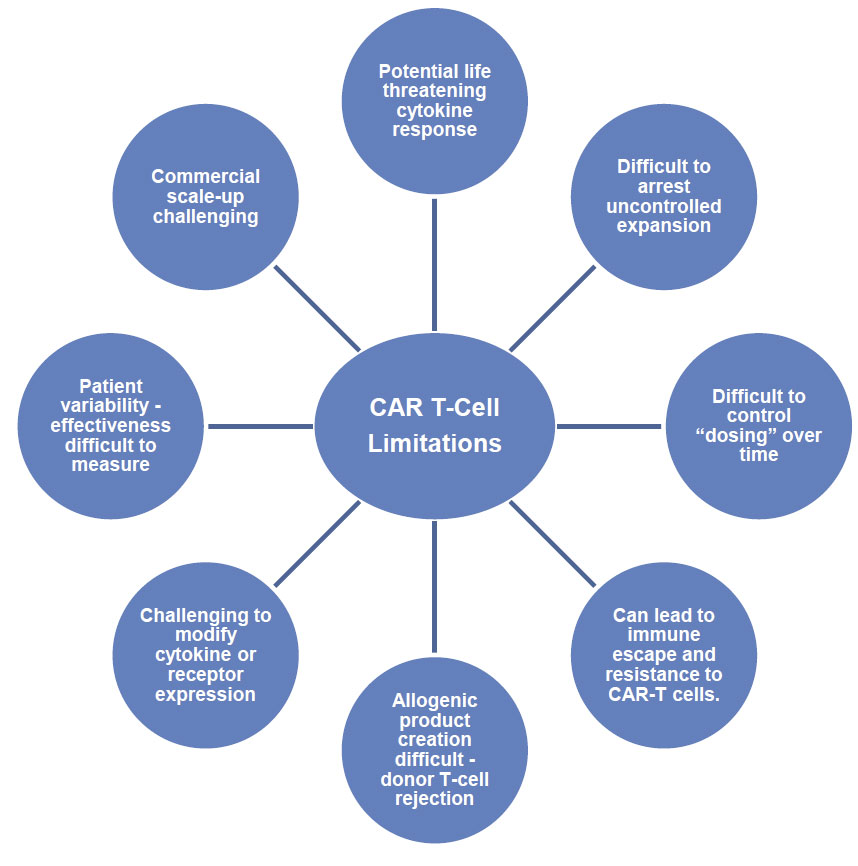 Recently cancer therapy has been revolutionised by the development of chimeric antigen receptor (CAR) T-cell based immunotherapy.

The CAR allows a patient’s T-cells to specifically recognise and target cancer cells for destruction. The CAR consists of a surface receptor that recognises a tumour specific protein or antigen (e.g. CD19) on the surface of the cancer cell. The CAR receptor is linked to proteins (co-stimulatory domains) inside the T-cell, which activate the T-cell once the CAR-T cell recognizes a cancer cell. Once activated, the T-cell releases its toxic granules into the cancer cell killing it.

However, despite the success of CAR T-cell based treatments, there are significant limitations at present.

With CAR-T cells a unique treatment has to be created for each patient by harvesting their own T-cells from the peripheral blood, which are then expanded and genetically modified in the laboratory-, a process taking several weeks. The T-cells, now with attached CARs, are infused back into the patient.

Unfortunately, potentially life threatening complications, such as cytokine release syndrome (CRS) and neurotoxicity have been reported in some patients on reinfusion of the cells.

The autologous nature of the therapy creates significant challenges in collecting sells and getting them to a lab that can modify them, expand them, and then deliver them back to the patient, which makes scaling the treatment difficult and the time involved can be several weeks before therapy can be provided. Sick patients may not be able to wait this long.

Finally, loss of target antigen can lead to immune escape and resistance to CAR-T cells, as has been seen with CAR-T cells targeting CD19.

NK cells are a useful alternative therapy with the potential to provide a potent treatment for cancer, but with significant advantages compared to T-cell products.

NK cells don’t rely on the CAR for tumor recognition and still have the potential to kill cancer cells that lose the target antigen. This ensures that the treatment is likely to remain effective and resistance is unlikely to occur.

The addition of a CAR to NK cells enhances their ability to seek different cancers, and the addition of other modification can enhance their killing ability and even overcome immune-inhibitory mechanisms.

The incorporation of a TRAIL variant into NK cells (a proprietary attribute of the company) reduces the risk of antigen escape as well as enabling granzyme-independent killing, reducing the risk of tumour resistance.

Similarly, other proprietary modifications, such as silencing CD96 or Siglec-7, can be incorporated to block immune-inhibitory mechanisms and prevent immune evasion.

From a safety and convenience stand point, NK cells are less likely to induce CRS or neurotoxicity and should be safer and easier to administer than T-cells. NK cells can be developed as an allogeneic “off the shelf” product, suitable for administration to patients without the need for individual customisation. This should greatly facilitate ease of use and provide immediate accessibility to treatment, rather than the current situation where an ill patient can wait weeks for treatment while their cancer progresses.

ONK Therapeutics aims to provide an affordable, widely applicable “off the shelf” product with the potential to produce enormous societal benefit.

Any cookies that may not be particularly necessary for the website to function and is used specifically to collect user personal data via analytics, ads, other embedded contents are termed as non-necessary cookies. It is mandatory to procure user consent prior to running these cookies on your website.